We provide Blu-ray jukebox appliances to store and protect data that needs to be archived or kept.

Blu-ray jukeboxes are available in multiple configurations, including “Mixed-Media” options that provide for both DVD and Blu-ray discs or drives in the same jukebox. Mixed-Media Blu-ray jukeboxes enable the easiest and most cost-effective migration path to Blu-ray for optical storage users.

Many current optical storage customers are looking at alternative technologies for their data archive storage needs. The Blu-ray jukebox comes at a key time when government regulations and company requirements are requiring longer and longer archive retention periods, proof of authenticity as well as fast access to archived files. A Blu-ray jukebox is ideal for companies looking for higher capacity and faster access times at the lowest total cost of ownership.

In February 2002, a large group of companies announced the introduction of the Blu-ray Disc (BD) format, the next generation in optical storage. The new format offers an immense storage capacity (up to 125GB) that is perfect for High Definition video recording and distribution, as well as for storing large amounts of data. The format shares the same form factors as existing CD and DVD optical discs allowing for backward compatibility.

Blu-ray, also known as Blu-ray Disc (BD), is the name of a next-generation optical disc format jointly developed by the Blu-ray Disc Association (BDA), a group of the world’s leading consumer electronics, personal computer and media manufacturers (including Apple, Dell, Hitachi, HP, JVC, LG, Mitsubishi, Panasonic, Pioneer, Philips, Samsung, Sharp, Sony, TDK and Thomson). The format was developed to enable recording, rewriting and playback of high-definition video (HD), as well as storing large amounts of data. The format offers more than five times the storage capacity of traditional DVDs and can hold up to 25GB on a single-layer disc, 50GB on a dual-layer disc and 100GB on a quad-layer disc. This extra capacity combined with the use of advanced video and audio codecs will offer consumers an unprecedented HD experience.

While current optical disc technologies such as DVD, DVD±R, DVD±RW, and DVD-RAM rely on a red laser to read and write data, the new format uses a blue-violet laser instead, hence the name Blu-ray. Despite the different type of lasers used, BD products can easily be made backward compatible with CD’s and DVDs through the use of a BD/DVD/CD compatible optical pickup unit. The benefit of using a blue-violet laser (405 nm) is that it has a shorter wavelength than a red laser (650 nm), which makes it possible to focus the laser spot with even greater precision. This allows data to be packed more tightly and stored in less space, so it’s possible to fit more data on the disc even though it’s the same size as a CD/DVD. This together with the change of numerical aperture to 0.85 is what enables a Blu-ray disc to hold 25/50/100/125GB.

What can you store?

A Blu-ray jukebox is not going to replace a hard disk solution with 16TB drives, that isn’t where it is designed  to operate.  A Blu-ray disc holds up to 125GB of data, I hear you say that’s not much, in reality it is a huge amount of data.  Ask yourself how many files do you storage that are 100GB in size?  The answer is very few.  Any business investing in a Blu-ray archive isn’t using the technology for capacity, it is being used to store any type of information for 50+ years or more!

Facebook use Blu-ray jukeboxes to store people’s memories for as long as possible using “Cold Storage”.

Remember a Blu-ray disc once written is “Tamper-proof”, this technology can then be used in court as evidence as it is a WORM (Write-once-read many). 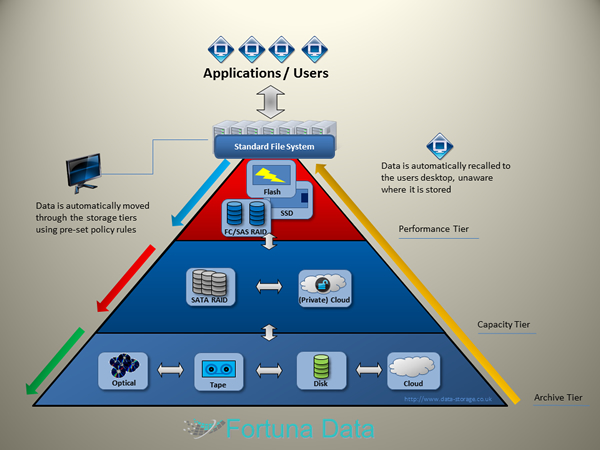 The capacity of a Blu-ray jukebox is limitless, as each Blu-ray disc written using UDF 2.0 can be removed, placed on a shelf for 20 years and read using a Blu-ray drive.  The software is a

For more information regarding the Blu-ray jukebox solutions we supply, call 01256 331614 or visit our Blu-ray website click here.