Having cloud backup software provides a convenient way to protect and secure data and applications from electronic devices are generating huge amounts of data that could have some form of intrinsic value to the business and could be backed up to the cloud.

Backup should be something that users do not have to worry about and the business should be able to backup the information that matters to them securely to a cloud location. Cloud backup should backup at a scheduled time every day or a suitable network connection is available.

Cloud Backup Software should consume minimal processing power and memory resources so that it doesn’t interfere with the users day to day activities. For a mobile worker, this type of cloud service has been available for a relatively long time it gets more difficult when you need to backup a servers operating system and application as we are now looking at generating far more data and our TCO (Total Cost Ownership), RTO (Recovery Time Objective) and RPO (Recovery Point Objective) are now called in to question. 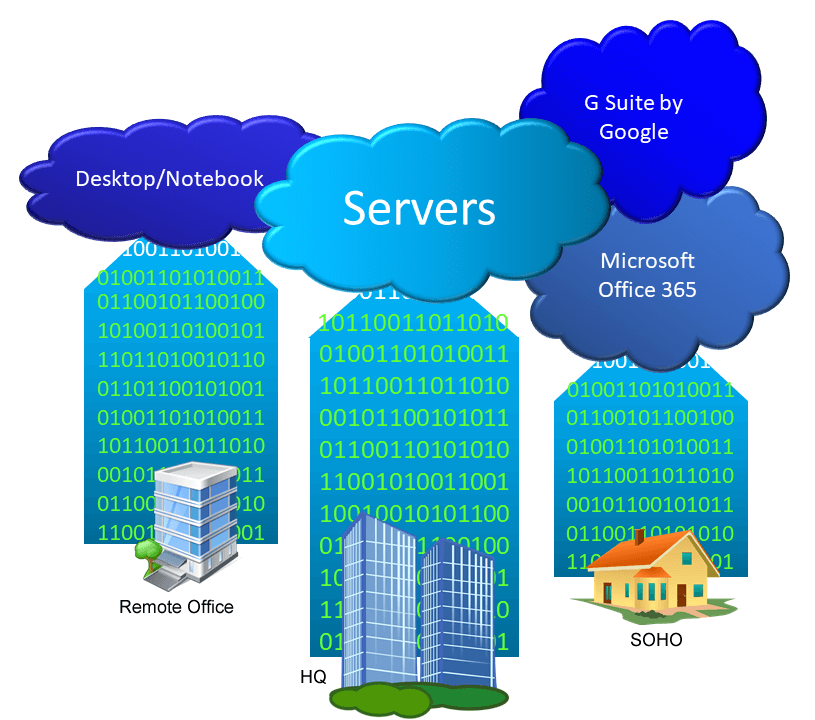 Up until mid-2000, most backups used tapes DAT, AIT, 1/4″, 8mm Exabyte, DLT and LTO. One by one they disappeared and left LTO as the final tape backup technology of choice. The backup of servers was done locally and normally once a day to a tape drive, autoloader or library and these backup tapes were collected and taken off-site. If you needed to restore data, then the tape was recalled. Next companies started to have DR sites and this ushered in a new era of data replication from D2D (disk to disk). These D2D devices mimic a tape library so the backup software believes it is writing to a tape. The backup data is then replicated across the WAN to the DR site. Over time these D2D devices included data deduplication and became backup devices in their own right. The backup software vendors started to add deduplication, replication and compression to their software as servers became more powerful using multicore and socket processors that could now backup to a RAID or JBOD and replicate the data to the DR site. Companies then needed to backup continually, rather than once a night as data was being created from home on mobile devices. In 2006 Amazon launched S3 the world’s first cloud storage solution that has since become the largest provider of cloud services globally. Gradually companies started to use Amazon S3 for backup and today there are numerous companies and organizations providing cloud backup services.

A server today whether physical or virtual typically has multi terabytes attached in the form of a disk storage or flash storage that run databases, applications or store unstructured data. The bottleneck historically backing up was the network, nowadays we have multiple ways of moving data around a network:

So the problem of moving large volumes of data around a network has primarily gone away, the issue is the WAN infrastructure for most of the UK still relies on Copper connections and are expensive to run and this is where backup to the cloud starts to cause problems when backing up servers. Just to upload 5TB’s of data to the cloud would take 44 hours providing you have of the available pipe and 10 hours to replicate over a 250Mbit connection using our bandwidth calculator. This may be fine for file restores but many companies have far more than 5TB’s and the real problem arises when we have a server failure or data loss and it is this type of issue that can take days to restore data, compared to a local backup that could restore the lost information in hours.

Our cloud backup software enables us to protect all of the following systems and applications to the cloud:

As explained above server cloud backup could be problematic in the event of a disaster. We provide cloud backup software that initially backs up to a local device and this information is then replicated to the cloud periodically. Over a period of time, all of your server data will be replicated to the cloud and always in sync with your on-site backup. Should a disaster strike you can now restore locally if you lose a building we can for 30 days spin up your applications in the cloud so that you can recover and rebuild your IT systems or provide disk drive containing your data.

If you would like to know more about the cloud backup services we provide then call us on 01256 331614 or complete our form below.