It is designed to be energy and space efficient and allows a business to scale its compute requirements as it grows, simply by adding another server blade into the blade chassis.

A blade is essentially a modular sliver of server that can be populated with the necessary compute and added to the chassis to scale as and when required.

There are blades that are diskless, storage resides on the SAN. This allows for a higher server density for compute using the CPU or GPU.

Due to the compartmented, nature of a blade chassis they tend to have a far higher supported life span than traditional rackmount servers. 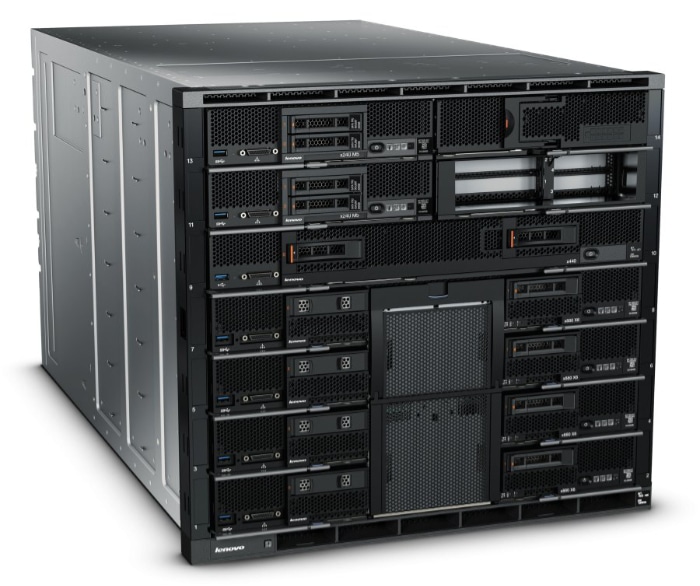 A blade simply inserts into the blade chassis. The chassis interconnects with all the servers and houses the cooling, power, networking, storage I/O and management via a backplane(s). In simple terms it is an empty shell to which you insert servers.

Advantages of a Blade Server

Below are some of the advantages of using a blade chassis over individual rackmount servers:

Reduced network complexity – Typically, x 10 rackmount servers = x 10 management connections. Whereas a blade server can house x 10 servers and have a single management port for them all.

Reduced power consumption – Each rackmount server would normally have x 2 PSU so having x 10 servers = x 20 power leads. As a blade chassis houses all the power it requires x 4 power leads to run the whole chassis. In addition to the power cables there are energy savings as the power supplies are optimised to run more efficiently.

Reduced network traffic – Having multiple servers housed in a blade chassis means the communication between the blade servers is contained within the chassis rather than broadcasting across the whole network.

Enhanced security – The blade chassis is a completely self-contained data centre with all the components housed in a modular chassis that can be rack mounted or floor standing. Due to the design it is very easy to secure a server from outside attacks as much of the compute and processing is done within the chassis.

Reduced cooling – A blade chassis is optimised and designed to cool multiple blade servers. This greatly reduces the number of fans required as many of the components on a blade server are airflow optimised i.e. processors are mounted at the back of the server nearer to the fans.

Reduced expenditure – If a business is growing rapidly and the compute requirement over a 2-3-year period can be measured then a blade server makes perfect financial sense. The biggest expenditure is the blade chassis to house the servers, so the upfront cost will be more than purchasing individual rackmount servers, however once you start to scale beyond four or six servers that upfront cost is recouped as well as all the savings mentioned above.

Physical space savings – As a blade chassis is highly dense and compact a 10U blade chassis can house up to 14 blades. Where 14 rack mount servers could easily take up 14U or 28U depending on the server size.

Fault tolerant – A blade chassis is designed to be fault tolerant by design to support failures of key components such as blade servers, switches, back planes, power supplies, fans, data storage and I/O. If a blade fails, just slide it out and replace it.

Greater support life – A blade chassis can be supported by the manufacturer for 10+ years whereas a normal server is supported for 5 years.

As a chassis houses multiple blades it is ideal for all the following applications.

Limitations of using a blade chassis

A chassis as mentioned does have many benefits over rackmount servers but there are some limitations as shown below:

If you need some guidance in choosing a suitable blade server chassis for your requirement or application, we’re here to help.