A tower server is designed to sit under a desk and are designed to work in an environment without air conditioning and are ideal when a rack cabinet isn’t required.

Whilst not as powerful as rackmount or blade servers they are easy to deploy and are perfect for printing or servers file in an office. Get the reliability you expect from the data centre, delivered in a package optimised for office environments. They are also relatively silent due to where they are used and deployed. 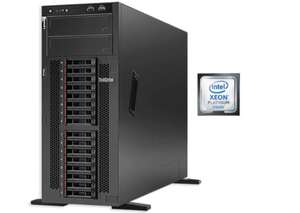 A tower server like a rack mount server has redundant fans and power supplies as well as hot swap drive bays. The network, graphics and storage controllers are normally mounted directly on the motherboard in a PCIe slot. There are also rackmount kits available to mount tower servers in racks later.

Advantages of a Tower Server

Below are some of the advantages of using a tower server:

Flexible - Designed for use in shops or offices where there isn’t enough space for a rack or air conditioning.

Storage Capacity - Some tower servers can now support 32 drives within a single tower server making them ideal for applications such as small branch office virtual machine or High Capacity NAS.

Multiple Processor Support - Tower servers are normally supplied with a single or dual CPU processors along with support for 1.5TB memory.

Adaptable - With increased CPU processing, data storage, memory, GPU and network connectivity a tower server could replace a NAS or act as the office VM server.

Virtualisation - With increased CPU processing, data storage, memory, GPU and network connectivity a tower server could replace a NAS or act as the office VM server.

A tower server does have many benefits over blade servers but there are some limitations as shown below:

If you need some guidance in choosing a suitable tower server for your requirement or application, we’re here to help.