We provide all flash storage arrays based on your requirement to deliver OLTP, Databases, Virtualisation for Server or Desktop, VOD, VDI, VR, 3D modelling, video editing, molecular modelling or IOPS.   Many of the newer advanced flash arrays utilise data deduplication and this dramatically increases the amount of flash storage capacity available.  Please consider that not all data is compressible, and tests would need to be carried out before specifying an all flash design.

Flash Storage provides outstanding performance compared to hard disk, but in order to achieve the desired performance, we also consider potential bottlenecks in the network in order to maximise the performance and alleviate any unforeseen issues. By deploying an enterprise flash array, you will typically see a 10x or more performance increase in your system environment which in turn leads to increased productivity. Although the cost of flash storage is coming down the cost per Terabyte is still 2-3x that of a comparable disk storage solution.

All Flash Storage vs Hard Disk

Enterprise flash storage capacities are slowly increasing and at present stand at 2TB for an SSD drive, although larger capacity drives have been announced by Seagate and Samsung they are not yet commercially available.  With hard disk capacities of 16TB and rising and likely to reach 20TB by 2021. An SSD flash drive has many benefits over hard disks and these are: 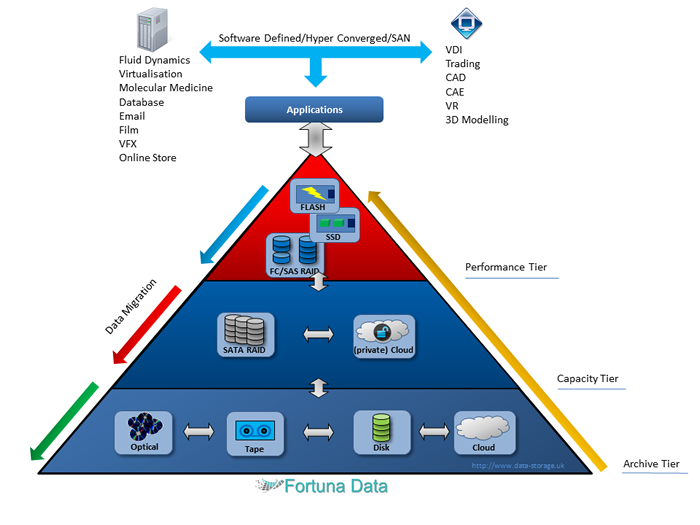 Whilst flash provides super-fast performance, another important thing to consider is the application and workload you are intending to run on your flash storage.  All flash has a limit on the number of DWPD (Drive Writes Per Day) permitted by each SSD. If you specify a flash array with a small number of drives and it is being heavily used, it is likely your flash storage will fail sooner than anticipated. It is always a useful question to ask as to the type of flash memory deployed in the array, below shows the main types of flash used today.

The differing types of flash

All of the systems below contain flash storage in one form or another.

Buying an flash storage solution it is a high investment and an unknown risk for many companies as they have always bought disk-based systems.  Flash storage today is as reliable as hard disk systems and can scale to provide PB’s of usable space.  They can have multiple flash controllers, support the latest flash technology developments including NVMe, clustered and provide scalability for performance and capacity.

We work with the world’s leading providers of flash storage to deliver solutions to enable your organisation to grow, deliver data faster and reduce unnecessary expenditure.